Ground Zero vs Mako and Downfall vs Orgless 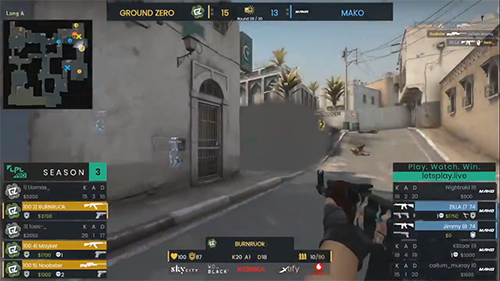 Ground Zero Esports and Downfall Gaming ultimately prevailed in the LPL Pro CS:GO League on Thursday evening, with two very well-deserved 2-0 victories that punctuated the end of the initial lower bracket of competition.

The final two games of the bracket commenced with Ground Zero (GZ) taking on Mako Esports Club in their preferred map, Dust2.

GZ almost immediately stamped their authority over Mako, with a ‘team ace’ coming in the CT sided pistol-only defense of bombsite A.

This same authority was seen throughout their entire defensive half, allowing the opposing team only a mere four round wins to their eleven.

Mako bravely force-brought after losing the second pistol round, and an early-round frag - courtesy of KStaar’s scout - re-instated their self-belief once again.

GZ managed to close out the first map of the best-of-three series despite constant defensive pressure from KStaar, Jimmy and some late-game heroics from callum_murray which took Mako to their final score of 13 rounds to the opponents 16.

High on their new-found belief, Mako got off to a hot start in the oppositions map selection, Inferno.

Largely thanks to the defensive efforts of ZILLA, they won the CT-side pistol round and consolidated on that effort in the round that followed.

However, Ground Zero managed to wrestle back momentum beyond the initial two rounds and went on to win ten of the following thirteen, ensuring that the team was well-placed heading into their defensive half.

Noobster and Llamas found themselves dominating most of the pivotal moves on the Terrorist side, imposing their offensive prowess upon each bombsite and at times, fragging with complete freedom.

The second half of map two began similarly to the first. Mako capitalised on a strong pistol round, although this time they followed up with four wins over the next five rounds.

At this point, GZ’s superiority in teamwork shone brightly as they went on to win the final five rounds of the game in emphatic fashion, leaving the final score-line reading 16 to 10.

While Mako fought bravely in both maps, unfortunately, they were up against a very professional GZ outfit who were rebounding from an unexpected loss to Paradox Gaming in the previous round.

Jimmy and KStaar performed best for Mako in Dust2, while ZILLA starred on Inferno.

Each member of GZ fired at various stages, however, Noobster and Llamas were a class above the rest, finishing with +15 and +14 overall kill/death ratios, respectively.

Ground Zero will now move on to the next round the competition where they will face a scarily confident Downfall Gaming outfit which ran rampant over Orgless in the second match of the day.

Orgless began on the Terrorist side of their map selection, Mirage. Although, with the clarity of hindsight… Perhaps it was a bad selection.

Mizzy locked down on bombsite B, Kyson was dynamic on bombsite A, and 2D threw down in ‘middle’ with his lethal AWP, leaving Orgless relatively answerless on the way to a less-than-flattering 12 to 3 score-line at the half.

It took only six further rounds for Downfall to secure their first victory of the night.

Determined to redeem their efforts in the second map of the series, Train, Orgless won their Counter Terrorist-sided pistol round but uncharacteristically rolled over in the round which followed.

Spidok really struggled to impose himself on both maps but stepped up during critical times at ‘popdog’ on Train, as Orgless attempted to fight off the relentless Terrorist sided Downfall outfit.

As expected, Downfall began their defensive half strongly and never looked like losing as Savage and Mizzy led the team to the first seven round wins of the final half.

Inevitably, Orgless would succumb to the pressure that Downfall imposed on them during their first half despite some phenomenal shooting from dreams, who was the most damaging player on the map with a +11 kill/death ratio.

Downfall rightfully went into this second match of the night as hot favourites, though it was later conceded that they still approached their opponents cautiously.

“They’re sharp. If you give them too much room, they will destroy you,” said Nathan ‘moop’ Smale after the win.  “You’ve just got to play more disciplined against teams like that.”

The team’s commitment to a disciplined approach eventually paid off, though their matchup against Ground Zero next week will undoubtedly require more of the same winning recipe.

Don’t miss out on the next round of LPL Pro CS:GO Season 3 2020 as things start to heat up towards the pointy end of the competition. Tune in next Wednesday at 7PM AEDT (9PM NZDT) on www.twitch.tv/LPL_CSGO to see which teams will prevail!