Just under five hours to submit your own submission if you were interested.
7 years ago

I personally find this to be a great opportunity for both existing casters and commentators, and those looking to branch into the field. - Casting competitions are great to gain experience with, especially those done on a global scale.

Anyone and everyone has a chance to do their best - so if you're even the slightest bit interested, I'd recommend going ahead to do it. - It's all about confidence!

My tips to those interested in entering into this:

Now, don't get me wrong, I'm not the best commentator out there, but I thought some people might appreciate having some tips if they were a little worried about it. I've talked to a few people about this, and some are worried about not being good enough to make the cut. Ultimately, there's only going to be one true winner, so please, I urge anyone interested to make the effort and submit your own caster submission!

The worst thing that can happen is that you get denied, but walk away with a fair amount of feedback. - Hopefully this also brings out some new people in our scene to become up and coming casters. 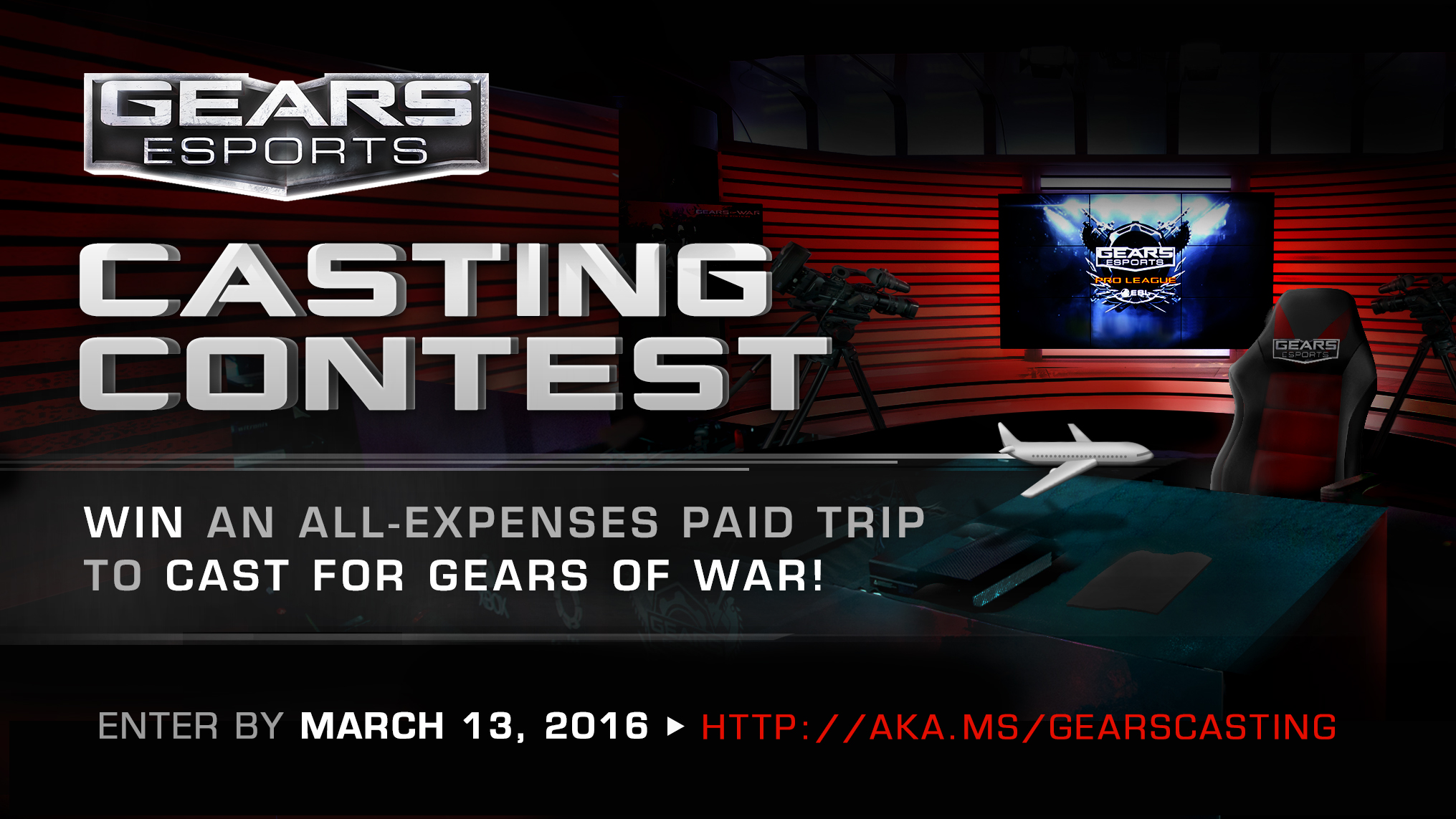 Ever wanted to try your hand at commentating a Gears of War match? Want to win an all-expenses paid trip to California from anywhere in the world to cast live at the ESL Americas Studios plus $500 cash? Open to experienced casters AND new aspiring casters with no previous experience!

INSTRUCTIONS:
Use provided video from the Season 1 Finals to commentate/cast over. You can do full play-by-play commentary or just color analysis.

Please note the video intentionally has no sound so you can cast over it. Please include video and audio of you casting the video.

PRIZE:
All expenses paid trip to the ESL Studios in California to commentate a Gears of War match plus $500 USD (includes airfare & accommodation from anywhere in the world)
7 years ago

Gears Of War is officially back on CyberGamer!

Congratulations Taimboiiz, Lumberjack and Ramificationz! - I'm sure you guys will do a great job at rebuilding something long lost.

It's a fun journey to experience. An interesting one, but fun nevertheless. - Congratulations again and good luck!
7 years ago

Welcome to the CyberGamer Advanced Warfare ASTRO Championship Series FTP ODC #7 gameday thread. This thread will provide you with all the competition information relevant to this tournament. Please post all results in this thread.

Best of luck to all 20 teams competing in today's one-day-competition. If you are planning on streaming today's competition, please let us know so we can advertise your stream! Be sure to also stay tuned to our Twitter and MLG.tv pages for updates on the competition.

[indent]Format: One-day-competition - Double Elimination
Date: Sunday, the 3rd of May, 2015
[SPOILER=Time: 10:30am AEDT]Australian Capital Territory: 10:30am
New South Wales: 10:30am
New Zealand: 12:30pm
Northern Territory: 9:00am
Queensland: 10:30am
South Australia: 10:00am
Tasmania: 10:30am
Victoria: 10:30am
Western Australia: 8:30am[/SPOILER]
[/indent]Round one:
Players will forfeit ONE game for every 10 minutes they do not show up. This will keep happening until enough games have been forfeited to cause the match to be lost.

Remaining rounds:
Once a match score has been recorded via official channels, that game will be official considered finished. Once a game has finished, both players have 15 minutes to enter a game lobby with their next opponent.

This competition will run as a double elimination competition. The current CyberGamer Advanced Warfare 4v4 ruleset will be used throughout the competition.

The bracket for this competition can be found here: http://challonge.com/CGAWCSFTP7

If teams are scheduled to play each other for a 2nd time in Double Elimination, their series will expand to a best of 7 series (if played in a Best of 3 previously), including the previous series, and pick up where that series left off.

For example, if PLAYER A beat PLAYER B by a 2-1 score in the winners bracket, the series will resume with PLAYER A leading by a score of 2 games to 1.

If teams are scheduled to play each other for a 2nd time in Double Elimination, their series will expand to a best of 11 series (if played in a Best of 5 previously), including the previous series, and pick up where that series left off.

For example, if PLAYER A beat PLAYER B by a 3-2 score in the winners bracket, the series will resume with PLAYER A leading by a score of 3 games to 2.

All of the required settings are listed below. If a setting is not listed below, it should not be changed from its default state.

Rules are subject to change at any time; it is the responsibility of all the players participating to know and understand the rules before scheduling or participating in any matches. By participating, you acknowledge that you have read, understand, and agree to abide by the rules posted here.

It is preferable that all players competing in this competition add each other over Xbox Live. This will make sure matches are happening fluently and overall will ensure a smooth tournament.

This gameday thread, along with the double elimination bracket, will be constantly updated on gameday, and we expect players to organise themselves in getting matches started; we do not want to be chasing teams. The more you guys can do to help this competition almost self-run on the day, the smoother it will run.

As mentioned above, please post all results in this thread. Feel free to also post below if you have any questions, concerns or comments!

Below, you will see the competition structure, as well as how to register for this competition.

To compete in this competition, you MUST be signed up on the CyberGamer Advanced Warfare ASTRO Championship Series ladder page. This can be found here: http://au.cybergamer.com/xboxone/codaw4v4champs/league/rankings/

To register for this competition, you will simply have to post on this thread below, like so:


Yes, I confirm that [INSERT TEAM NAME] - [INSERT TEAM LINK] will compete in the CyberGamer Advanced Warfare Championship Series Midweek #20 on the 22nd of April, 2015.

Be warned; if you register for this competition, but do not turn up to play, you will be deducted points as punishment.

The reason behind all core players is because at the end of each competition, players are awarded individual player points.

Player points are only awarded to 4 players however, so core players are used to determine which players get points, and which remaining player (if any) is the substitute player. Failure to set core players will result in all non-core members not receiving points from the competition.

To set core players, go to your team page, and click on the "Edit Members" option located at the top right of the page. From here, you will see the "Add as core member" option; simply click on this for all 4 core players that you wish to set. If you do not have any core changes, or you cannot set core players, please make a support ticket detailing the issue.

*Dates are subject to change.